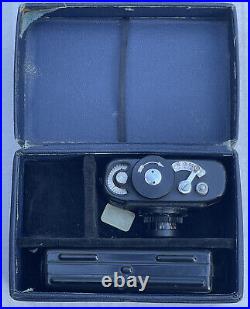 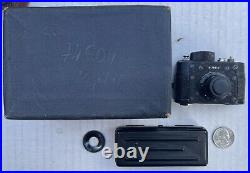 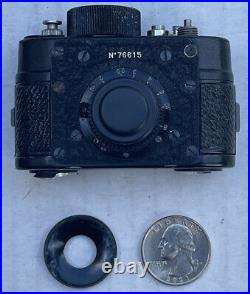 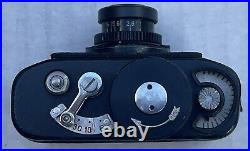 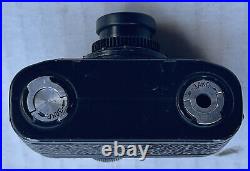 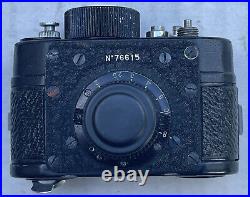 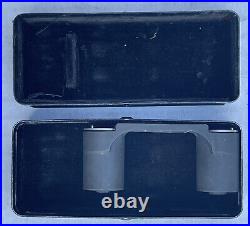 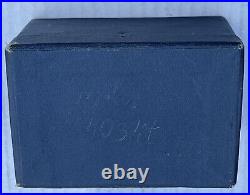 The F-21 model was the workhorse of the specialty KGB spy cameras. This one was made during the Cold War in 1976, and it includes the F-21 camera, a film cartridge and case, box, and a single jacket/coat button. The F-21s were made at the KMZ plant from 1951 to the late 1980s. This camera was designed especially for covert/clandestine use by the KGB and other Soviet affiliated intelligence units. Unlike most subminiature cameras these were not available commercially. It was so effective that the East German intelligence service (Stasi) adopted it for clandestine use. One of the special features of the camera was the ability to shoot multiple shots without rewinding or advancing the film manually. The winding knob on top of the camera stored energy in a spring that advanced the film using a small integrated motor drive. The camera was so small that it could be used in a variety of concealments and disguises. Belt buckles, coat buttons, purse and bag adapters, movie cameras, camera cases, thermos bottles, books, umbrellas, and many others. Your chance to own a relic from Cold War spy history. This item is in the category “Cameras & Photo\Vintage Movie & Photography\Vintage Cameras\Subminiature Cameras”. The seller is “the_dog_tag” and is located in this country: US. This item can be shipped worldwide.