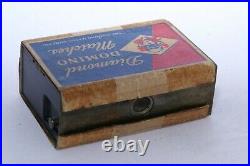 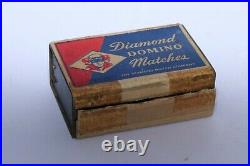 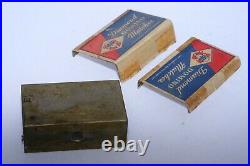 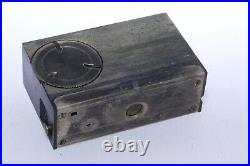 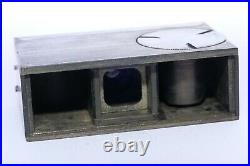 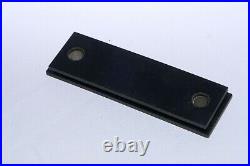 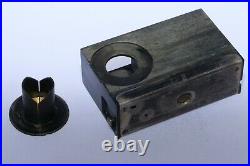 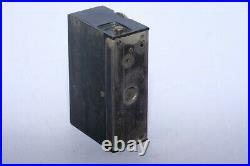 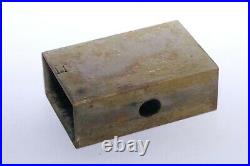 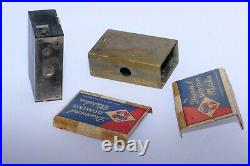 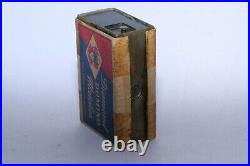 Kodak MATCHBOX compact spy camera. Very rare spy camera for the OSS made during WWII. Camera was requested to by made for the Office of Strategic Services department. Metal and plastic camera shaped like a matchbox. Outer matchbox covering says “Diamond Domino Matches”. Original cardboard covering in two pieces. This super scarce collectible Kodak Matchbox camera is in Ex or 8 out of 10 vintage condition. No dings or dents. Does show some signs of wear around on the camera and matchbox. Included original pouch case. Produces 1/2 x 1/2 exposures on 16mm film. Don’t miss this chance to own a rare collectible Kodak Matchbox camera. A true museum piece. The Eastman Kodak Company was approached in late 1943 or early 1944 by the United States Office of Strategic Services (forerunner to the CIA) to develop a matchbox sized camera that could be used by agents without detection. Officially called the Eastman M. For match box it has a Bakelite inner body containing the camera’s working parts, the film and the lens assembly. This plastic body slid into an outer metal sleeve. The whole camera (7/8×1 1/2 x 2 3/8 inches 22x38x60mm) was then to fit into a wooden matchbox which are typically smaller 15x40x55mm. The shutter is set to 1/60th second or B for timed exposures. The 25mm f/5 Tessar type lens could be set to f8 (f16 ref William White), adjusted by a small pin. The fixed lens had a focal range of 4.5 feet to infinity. The two foot length of film took 34 exposures. Negative size is 14x14mm. It was originally supplied with several rolls of film, tablets of chemicals, spoon, agitating stick, chamois, and film clips. It could also be used with a special stand and close up lens to copy documents. It was requisitioned with labels like a Swedish or Japanese matchbox or plain for camouflage by the operator. The first model simply loaded roll film, but had jamming problems. The second model uses film spools. Model 1 has three markings 120 degrees apart on the winding knob. Model 2 has only two markings exactly 180 degrees apart. The initial order for 500 cameras was delivered in early 1944. The project remained secret until 1947. The item “Rare Kodak MATCHBOX compact Spy Camera for the OSS. First Version with case” is in sale since Tuesday, February 2, 2021. This item is in the category “Cameras & Photo\Vintage Movie & Photography\Vintage Cameras\Subminiature Cameras”. The seller is “igorcamera” and is located in Solon, Ohio. This item can be shipped to United States.