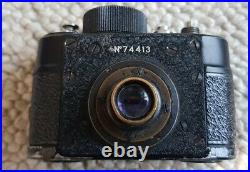 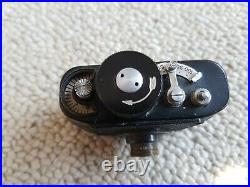 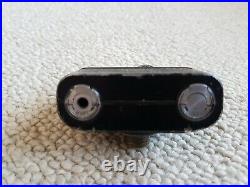 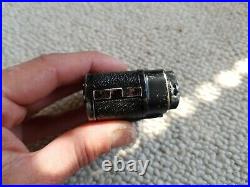 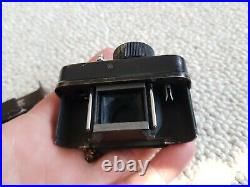 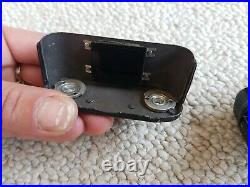 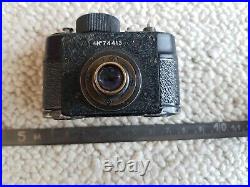 World’s First Button Camera, 1950’s Believe it or not, the very first covert button cameras where used by intelligence agencies in the 1950’s. However, they could only do a still photo snap shot and were so bulky, you could only wear them with a heavy coat. Today’s modern day button cameras with portable pocket digital video recordersis a far cry from what top investigators and intelligence agents could use in the 1950’s. But if you had one of these in the 1950’s you were high tech and very cutting edge. They were custom developed by theCIAthe KGB as well as British Intelligence. (This one was likely made by the KGB) If you were a private investigator and had one, you were very rare! Even if you could afford one which might set you back the average of what was then several month’s pay, finding one was quite another matter. The button hides a lens which screws onto a subminiature camera. There was a thick cord that ran into a pocket. You simply placed your hand in your coat pocket and pulled the lever which then took a still photo. They were just too bulky to use without a coat. However, in the 1960’s theCIAdeveloped one that worked in a belt buckle. Today, there is abelt buckle video camera/DVRbuilt into one small unit as well as one built into awatch, apenandeyeglasses. Video surveillance button cameras were simply not on the market nor made in this time period as the technology to do that was just not there. There were hundreds of these still cameras used mainly by federal intelligence agents such asCIAand KGB agents. The camera itself, which was very very small for it’s time period, took 16 mm subminiature film. No one knows exactly how many of these button cameras where made but they are very rare today. When in Austin, Texas be sure to come by and see the Spy And Private-Eye Museum in person! Above is the inside of the button cover lens. It screws onto the subminiature camera lens. Notice the back side of the center of the button and the strings coming in. When the hidden lever was pushed in, the strings would quickly pull down the doors on the center of the button and a snapshot taken at the same time. Once screwed on, you can see from the back that the button mount was like a plate that fit over the front of the camera. The cord provided the lever that went into the pocket to take the covert snap shot. A trench coat had to be modified with buttons and holes in the back to bring the cord into the trench coat pocket. You are looking at genuine piece of cold war history. Model that i have for sale is unfortunately incomplete. Its missing the button hole cover and release mechanism that would be hidden in the pocket. Nevertheless its one of its kind and only one for sale. There are few examples in museums stasi museum in Berlin, Austin museum in Texas. If you want more pics or other info drop me a message. Happy shopping and check my other auctions. The item “Vintage Spy Camera Button Hole” is in sale since Monday, May 11, 2020. This item is in the category “Cameras & Photography\Vintage Photography\Vintage Cameras\Sub-Mini Cameras”. The seller is “magd-5yjj02″ and is located in Heriot. This item can be shipped worldwide.