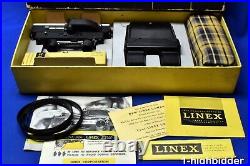 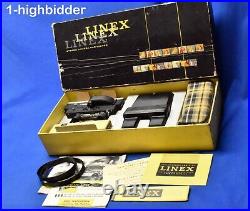 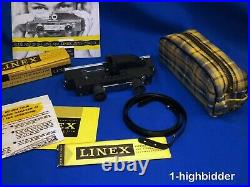 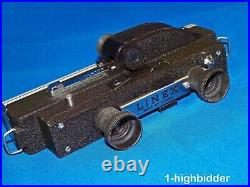 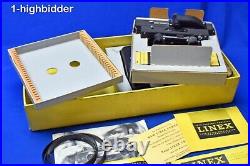 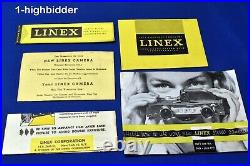 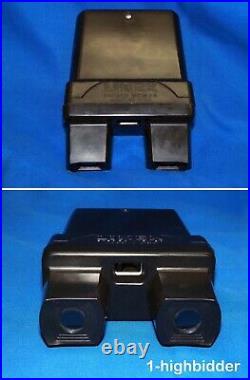 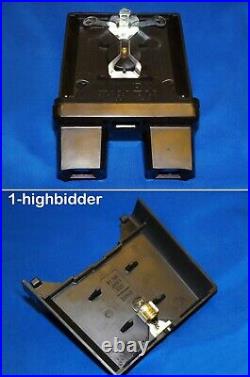 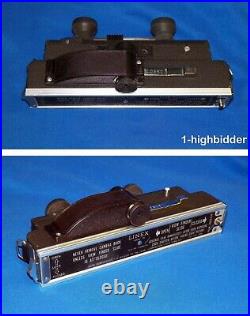 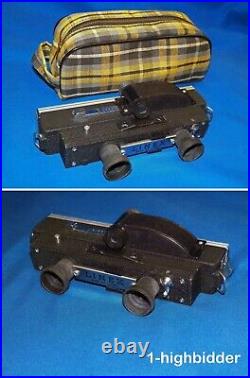 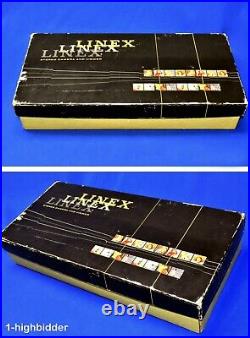 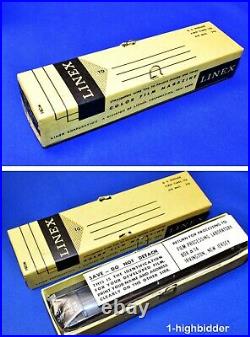 Vintage 1953 Lionel Linex (Train) Subminiature Film 3D Stereo Viewer Camera Set. I have collected 3D photo memorabilia for 30+ years and it’s time that I let some of my prized collectibles go. This is a used 1953 Linex 16mm stereo kit produced by Lionel Manufacturing Corp. The set includes the camera, the original yellow plaid camera case, camera strap, stereo viewer, film cassette, Original manual, various instructions for returning film to processor, and the original box. From the condition, it was used very little! The camera is complete and looks to be in great condition and the shutter seems to be working perfect although I have not had it bench tested. It makes stereo negatives that measure 16 x 20 mm and uses a specially designed cartridge with 8 exposures (one included). This camera is a great oddity in the world of stereo cameras and every part of it only works with this camera and none others! Please see description below… The camera was very short lived and didn’t take the best photos so it is also pretty hard to find these days. Regardless, it is cool looking and has gotten lots of comments in my own stereo camera collection just because it doesn’t fit the mold of what most look like. The viewer is complete and in great condition with just normal wear. Everything has been cleaned and checked and is working great! This is the only viewer that I have ever seen that contains an extra bulb in the removable lid. It takes two “D Batteries” which are not included. As mentioned, this set also comes with a rare mint condition unopened film cassette cartridge, an original manual, box. The manual is in great condition, but the box was in poor condition with split corners and wear throughout as most all of them are today. The camera is very heavy and tends to tear the cardboard inserts which hold them in place. I spent several hours gluing, repairing and reinforcing the box so that it looks as it does in my photos. I did this because I thought I would be keeping this one in my collection forever. If you are a “box perfectionist” this repaired box might not please you. Everything will be packaged with lots of care, bubble wrap and sturdy packaging, and fully insured! About the Linex Stereo Camera. The story behind the camera is that in 1949 Joshua Lionel Cowan (Lionel president at the time) received a Stereo Realist from his son for Christmas and found it to be too complicated. He then decided to produce a low-cost, fixed-focus stereo camera. In my humble opinion, he should have stuck to trains… The camera is stoutly built, primarily of cast metal, and has rather limited controls. There is a single “snapshot” shutter speed; and the twin achromatic lenses are fixed focus, with 6 feet as the closest recommended subject distance. Exposure may be adjusted between “normal” and “bright” conditions using a front selector lever, which switches the lens aperture between roughly f/6 and f/8. Apparently the model train business was too successful with the trains and the camera was dropped in 1955 after about 85,000 were made. PLEASE CHECK OUT MY OTHER LISTINGS FOR MORE STEREO VIEWERS, VIEWS, & CAMERAS. The photos and text in this listing are copyrighted. I spend lots of time writing up my descriptions and despise it when un-original losers cut and paste my descriptions in as their own. The item “Vintage 1953 Lionel Linex (Train) Subminiature Film 3D Stereo Viewer Camera Set” is in sale since Monday, October 4, 2021. This item is in the category “Cameras & Photo\Vintage Movie & Photography\Vintage Cameras\Stereo Cameras”. The seller is “1-highbidder” and is located in Orem, Utah. This item can be shipped worldwide.